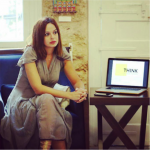 With a background in marketing, advertising, and graphic design, Nelly Baz shifted from designing commercially oriented projects to tackling social challenges and problem solving after acquiring her Masters in Strategic Design for Politecnico Di Milano, Italy. While living in Milan, she consulted alongside Make A Cube finding sustainable solutions with social innovation start-ups for Expo Milan 2015 aiming to turn the latter into a sustainable smart city.

Being a passionate researcher in open governments and the collaborative economy, nelly became an active member of OuiShare, the global community of the sharing economy. After relocating to Beirut in 2014, she became Lebanon’s country connector for OuiShare, accepting the challenge to build Beirut’s collaborative community, and simultaneously co-founded hbr creative platform where she managed the design hub during its first 2 years of launching. In June 2016, nelly was assigned to head the programs committee at ISOC-LB, after being elected as a board member at the Internet Society | Lebanon Chapter. Today, along heading and organizing #netnite– ISOC Lebanon event, nelly works as a freelance strategic designer and consultant developing solutions through new narratives, building innovative ecosystems for sustainable living.